Clawing at his back, she sucked in rapid breaths as a rising tide of orgasm overtook her, sending her soaring over a cliff. “Don’t stop,” she begged, her body hot, her eyes on his. Her pussy twitched, clamping down around his cock as he thrust into her harder, faster. “Oh my God, Gavin, keep going.”

Muscles tensing, Gavin tried to breathe through each stroke in an attempt to prolong her pleasure, but hell if he wasn’t making it hard on himself as his gaze fastened on the heavy sway of Emily’s lush breasts. Determination firmed his jaw as he watched Emily fall into a fray of bliss. He pumped deeper into her as her orgasm became another, then a third, until she screamed out in a final rush of release.

Mentally unraveled, physically turned inside out, and raw from head to toe, Emily clutched at Gavin’s damp hair. She dragged his beautiful mouth down to hers. Kissing her hard and slow, Gavin let out a long, low growl. Emily felt his silky jet of semen spill into her, his warmth filling her again and again. His rigid body jerked above hers, his fingers knotting in her hair. With their hearts thundering, breath mingling, and souls intertwining, for Emily, it felt as if their bodies knew what they meant to one another.

Spent, Gavin burrowed his face into Emily’s neck, breathing in, and drowning under the scent of their combined mixture. His mouth floated across her cheek, his fingers massaging her hair. “I need to hold and make love to you all night.”

And, God, he did. Showing her over and over again how much he needed her, Gavin wiped away Emily’s memories of a ruthless past, closing the door to what never should’ve been. As he held her through the night, her breathless future was contained in the expanse of his warm, strong arms, and she knew this magnificent start to what lie ahead would be forever ingrained in her heart. 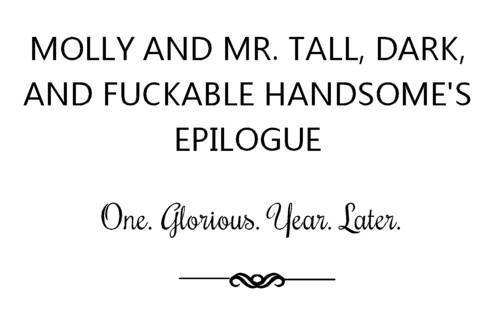 Gavin slid his key in the lock and walked into the savory smell of a home-cooked meal. He was impressed by how far Emily had come over the past year with her culinary skills. She’d said she would master cooking, and hell if she didn’t. Though he’d never admit it to his mother, Gavin thought Emily’s lasagna made hers taste like the frozen kind. Without Emily’s knowledge, Gavin stepped into the kitchen and watched with adoration as she pulled a roast from the oven.

Placing his briefcase on the table, Gavin’s eyes roamed over her black heels, up her shapely legs beneath a skirt that stopped a few inches above her knees, to the gracious contour of her jaw. She was Gavin’s angel. His walking, breathing, amazing for life, mind-blowing, all-consuming angel. Emily stabbed a meat thermometer into the sizzling roast. She must’ve burned herself because Gavin heard her gasp. It was possible his angel’s cooking skills weren’t as great as he thought, but that didn’t matter. She still blew his mind.

Coming up behind her, he snaked his arms around her waist and buried his face in the crook of her neck. Emily jumped, and Gavin chuckled. “Did I scare you?” he whispered, running his lips along her neck. “And did the roast attack you? If so, I’ll kill him.”

“Yes, you scared me,” Emily answered, facing him. With a smile, she slowly shoved her index finger in Gavin’s mouth. He sucked it lightly, his swirling tongue bringing her burn instant comfort. “And yes, he attacked me. But I’d rather you not kill anything today.” She pulled her finger from his mouth, her brow drawn up seductively.

Gavin pressed her back against the counter, his hungry blue eyes zeroed in on her plump lips. He untied the Betty Crocker-looking apron from her waist and dropped it to the floor. “Where’s Noah?”

Emily looped her arms around his neck. “I had your parents pick him up for the night so I can show you a good time on your birthday, old man.”

Armed with a lazy grin, Gavin bent his head and crushed his mouth to hers. Emily moaned, and Gavin grabbed her thigh, hiking it up around his waist. “Old man?” he questioned between kisses. “I’m thirty. And let’s not forget all the swoon worthy”—he kissed her harder—”intense… satisfying”—he nipped her neck—”mind numbing… hot as hell”—he licked her earlobe—”‘Gavin give it to me harder now, please don’t stop, oh my God, keep going’ moments this old man’s shown you.”

“Mmm hmm. You have given me quite a few of those,” Emily purred. Sexual need balled low in her belly. Kissing her deeper, Gavin started unbuttoning her blouse. Emily’s eyes fluttered closed as he dragged his lips down her jaw, across her neck, settling them on the swell of her breast. She tangled her fingers in his hair. “Gavin, wait, I want you to open your gift first.”

He didn’t stop. Hell. No. He slowly pulled the scalloped edge of her black lace bra just below her nipple. With a devious smile, he looked at her as he flicked his tongue across the hardened bud. Emily gasped and bit her lip. “I thought it was obvious I was opening my gift, Mrs. Blake.” He lifted her onto the cool granite counter, pulled her tiny apple ass to the very edge, and shimmied between her legs. Licking into her mouth, he groaned, his body riveted by her tantalizing taste. “I’m the birthday boy, which means I get to call the shots. Sex. Lots of it. Here and now. With my hot wife on the counter.”

Tilting her head to allow Gavin to devour her neck, Emily released another moan and hooked her legs around his waist. Over her increased breathing, she heard her heels hit the wood floor. Gavin kissed her harder, making it difficult for her to stop. But she knew how to get him. “How about your hot wife incorporates wild sex into the gift she got for you? Sound good?”

Gavin caught her lip between his teeth and stared into her eyes for a long moment. Eventually, he released it and backed away slightly, his grin wide. “Incorporating wild sex into a gift you’ve already gotten me? Mmm, I can’t say you haven’t piqued my curiosity. Does it require batteries?”

Emily nodded, her smile salacious. “Oh, yes. It requires a very large battery.” Gavin lifted a curious brow, his grin widening. She hopped off the counter, grabbed Gavin’s hand, and started leading him toward the garage door. “Close your eyes,” she whispered.

“What are you doing?” Gavin probed, a devilish smirk curling his mouth.

With a quick hand, Emily pulled him by his necktie down to her mouth. Running her tongue along his irresistible lips, she swung her arm around his waist and squeezed his ass. Tight. “It may be your birthday, Mr. Blake, but I’m the one running the show. No questions. Got it?”

Yep, his wicked angel knew how to make Gavin’s stone harder. “I’m nothing but a peasant to your demands, sweets.” Smiling, Emily watched him close his eyes, proud of the authority she held. “But I’m definitely pulling the alpha caveman card on your pretty little ass during our sexcapade.”

Severely loving the authority he stripped from her, she ran over to her discarded apron. Picking it up, she shoved her hand into the pocket and whipped out the very blindfold he’d teased her with when he showed her Noah’s nursery and the house. Oh yes, payback was about to become Gavin’s bitch. Coming up behind him, she slid it over his face, making sure his intoxicating baby blues were covered.

Gavin tossed his head back, laughing. “Very sneaky. I like.”

Emily intertwined her fingers in his as she led him through the mudroom and into the garage. “I’ve learned from the best of them.”

“Can’t say I’d disagree with that statement.” Gavin crossed his arms, a grin lighting up his face. “I’ve taught you every single naughty thing you know.”

Shaking her head, Emily hit the garage door opener and smiled at not only Gavin’s over-confident remark, but her carefully thought out birthday gift. Sleek, as silver as a shiny bullet, and wrapped in a larger than life Yankees bow, Emily’s eyes scanned Gavin’s new… minivan. She couldn’t bring herself to purchase a forest green one. Nope. And being it wasn’t in the same class as the insanely priced sports cars Gavin was accustomed to driving, the Chrysler Town and Country would be something that would take some getting used to. However, considering the lower end vehicle held more meaning than she could ever imagine, Emily was pretty positive this color and model might fit the bill.