a) an elephant, a rat

4. Fill in the nouns from the box.

4) The princess lived in a high ___ with long narrow windows.

5. Make up sentences using two groups of words. Make up your own sentences.

Example: This coat is made of fur. The benches were made of wood.

6. Fill in the prepositions if necessary.

7. Answer the questions and speak about yourself.

1) Where do you have dinner?

3) What do you do before you have dinner?

9. Imagine that you're the Cat. Tell your master how you played a trick on the Giant. 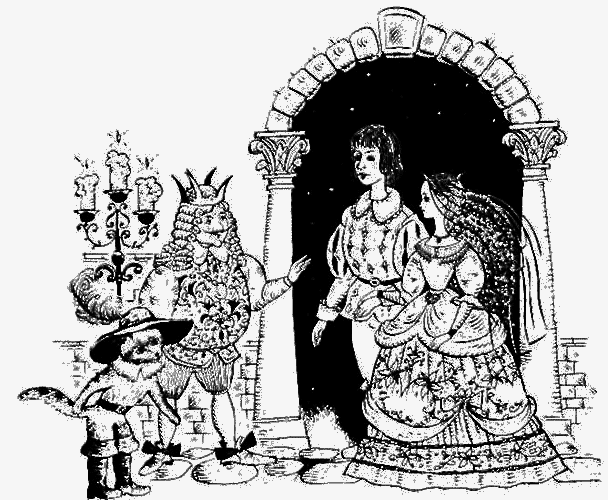 Meanwhile the King, his daughter and the Marquis of Carabas arrived at the castle. The carriage drove over the drawbridge with a loud noise. The Cat heard the noise and ran out into the yard to meet the visitors.

"Welcome, sir, to the castle of the Marquis of Carabas," he said in a loud voice.

"Your castle is so beautiful, Marquis," said the King. "Nothing could be finer than this yard and all these buildings. It's not a castle at all. It's a real palace. Let's go inside and look around, if you don't mind."

The King and his companions went through several beautiful rooms and came into a great hall. In the middle of the hall they saw a long table. It was ready for dinner. There were a lot of wonderful things on the table. All of them were the Giant's favourite dishes.

"Why don't we have dinner now?" said the Marquis. "Please sit down."

The guests took their,places. Everyone was hungry, so the dinner started at once.

The King was happy. His daughter was happy too. The girl, in fact, was very much in love with the handsome and polite young man.

His majesty was a practical man, too.

"The marquis is a noble gentleman. My daughter likes him, and he's rich. I think he can make a good husband for my daughter," he thought after his sixth or seventh glass of wine.

Soon the dinner was over. The King looked across the table at the miller's son.

"You can marry her then. If you want, of course," said the King. "That's your choice."

"I am happy to do that," said the Marquis of Carabas.

The miller's son married the King's daughter the next day. The young man was happy. He was a rich noble gentleman now. The Giant's castle belonged to him. He had all the Giant's lands, too. And he had a beautiful wife.

The Cat in Boots became at once a great lord. Of course, he stayed in the castle with the marquis and the princess. He ordered more elegant boots for himself. But he never ran after mice any more, except for pleasure.

I think he can make a good husband for my daughter — Я думаю, он может стать хорошим мужем моей дочери.

1) Who ran out in the yard to meet the King and his companions?

2) Where did the King and his companions have dinner?

3) What idea did the King have after his sixth or seventh glass of wine?

2. Put the sentences in the right order.

2) The King's carriage drove over the drawbridge.

3) The Cat ordered nicer boots for himself.

4) The King and his companions sat down to have dinner.

5) The King got out of the carriage and went to the door.

6) The Cat in Boots became a great lord.

7) The King looked across the table at the miller's son.

1) The Cat ran out into the yard because…

2) The King went inside the castle because…

3) The miller's son invited his guests to have dinner because…

4. Fill in the nouns from the box.

1) "What is your favourite ___, Your Majesty?" asked the Marquis of Carabas.

5. Put the verbs in brackets in the right form.

1) The King's carriage (to drive) into the yard of the castle.

4) The Cat (to refuse) to drink wine at that dinner in the castle.

6. Fill in the prepositions from the box.

on in among through into

7. Describe the dinner in the castle.

8. The King was a practical man. What other characters were practical too? How can you prove that?

9. The Cat promised to bring his master luck. Did he do it? How did he do it?